Cadastres and the history of places 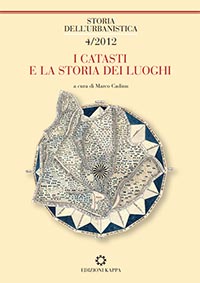 This fourth issue of the third series (2012) of “Storia dell’Urbanistica” (“History of Town Planning”) describes the results of a basic research project initiated in 2010 involving numerous academics and scholars in the study of cadastres. Presenting a significant part of its results, the issue seeks to reinforce the necessity of firmly anchoring studies of settlement history and territorial transformation to thorough knowledge and understanding of governmental maps produced since the end of the 18th century. The project was stimulated by discussions regarding the preservation of Sardinia’s historic centers triggered by the 2006 approval of its Regional Landscape Plan (Regional Council approval n. 36/7, September 5, 2006).

The Sardinia landscape plan was the result of the provisions contained in Articles 135 and 143 of the national Code of Cultural and Landscape Heritage (on its cogency, please see the editorial in the journal’s 3/2011 issue) which specifically refers to the use of historic cartography as a means of recognizing the “centers of ancient and early formation” (Article 51 of the plan code), upon which to base the subsequent definition of their perimeters.

The research project – entitled “Development of methods for the production of medieval and modern reconstruction plans of cities in Sardinia: computerized analysis of lot structure and urban evolution of historic settlements” – was funded by the Regional Law 7 (August 2007, “Promotion of scientific research and technological innovation in Sardinia”) and coordinated by Marco Cadinu.[+]

It contributed to establishing and reinforcing important connections with comparable national and European initiatives, especially on the occasion of the international conference, “I catasti e la storia dei luoghi. Metodi per la ricostruzione storica di contesti urbani e paesaggistici, finalizzati alla tutela e al progetto” (Cadastres and the history of places. Methods for the historic reconstruction of urban and landscape contexts in preservation and planning) held in Cagliari on October, 12-13,2012.

The topic of historic cadastres highlights the journal’s continuing interest in exploring the relationships between documentary and archival studies and research on the formation and evolution of the historic city, even applied operationally to the fields of planning and preservation. Such relationships are supported by scientific principles deriving from other studies which, while distant in time, are still of indisputable actuality.

The most notable of these is Enrico Guidoni’s publication (1985-1992) of the first six maps (of the 86 planned) of the Rome Historic Center Map, with which the distinguished scholar sought to “contribute to the knowledge of the city’s architectural and urban heritage and its transformations, creating an initial framework of knowledge necessary for further research and investigation.”

The initiative consisted in layering contemporary cadastral mapping with Gregorian cadastre geometries (1816-1824) and archaeological information taken from Forma Urbis Romae by Rodolfo Lanciani (1893-1901). “Thanks to the immediate stratification of colors”, it sought to implement “an overall idea of the important pre-existing Roman context and the features of the built fabric before contemporary transformations.”

In 1985, this writer published the exhibition catalog for Città ed archivi nell’età degli imperi. Urbanistica e interventi di architettura da Napoleone agli Asburgo (1806-1866), (City and archives in the age of the empires. Urban and architectural interventions from Napoleon to the Habsburgs) held in Vicenza from September 27 to October 20.

The exhibition explored the formation of the French cadastre during the Kingdom of Italy period and the systematic introduction of graphic representation as a means to manage and govern urban design and architecture.

These pioneering initiatives were followed by the publication, promoted by Guidoni with the participation of other scholars, of the Atlante storico delle città italiane (Historic Atlas of Italian Towns) (initiated in 1985 and now with nearly fifty titles) in which cartographic restitution was considered the inevitable point of arrival for scholarly investigation.

This publication was accompanied by reconstruction plans of the urban fabrics of some Italian cities (Città della Pieve, Priverno, Vetralla, Blera, Tarquinia), which – as “manifestos” focusing mainly on the medieval period – included, in addition to the cataloguing of roads and key monuments, the census of walls that can still be observed through direct recognition or stratigraphic study.

These plans became the foundations for future studies and significant incentives for the preservation of architectural and environmental heritage. Still other experiences concerned the critical use of the information potential that could be garnered from 18th and 19th century cadastral maps: from medieval Modena (1999) to Renaissance Urbino (2002) to the 16th century plan of Senigallia (2009). The relevance and validity of the methodological foundations of Guidoni’s studies in this field were confirmed – after many years – by a number of recent initiatives designed to highlight and reinforce the knowledge contained in historic cadastral representations.

Among these, the Autonomous Province of Trento’s (2006) georeferencing of maps from the 1817 Austro-Hungarian land register is notable. In addition to representing lot boundaries, “with watercolors, conventional signs and symbols, differentiating the cultivations, building types, roads and waterways”, they display meticulous attention to detail as in the case of the “front entrance of a building highlighted in bold or [of] the grinding wheel that identifies hydraulically operated mills” rendering these maps “eloquent and understandable to non-experts”.

The on-line publication of this documentation (2013) required specific full text search software that could correlate information from different documentary and cartographic sources, allowing the navigation of cadastral maps and their relevant records, revealing the meaning of the symbols and numbering characterizing property divisions.

It is worth noting, finally, the facsimile edition, edited by M. Repele, M. Rossi and E. Tonetti (Arzignano, 2011), the Instructions of the Central Directorate of Census surveyors responsible for the extent of land and formation of maps and sommarioni in performance of the Royal Decree of 13 April 1807, published in Milan in 1811, with which the Kingdom of Italy defines the rules (graphical and textual) for the preparation of cadastre, undertaken through the use of the Praetorian Tablet, geodetic instrument for some time been in the technical and conceptual baggage of surveyors, widely used for a few years before the military map of the Duchy of Venice (Topographisch-geometrische Kriegskarte von dem Hertzogtum, Venedig, 1798-1805).

The journal’s remarkable scholarly dedication manifested in this issue is attested by the number of truly outstanding papers and their organization in particularly interesting sections and thematic fields. Respecting its founder’s original intentions, “Storia dell’Urbanistica” intends to maintain its commitment – guaranteed by the resumption of its publication in 2009 – to remain the foremost reference point and forum for excellence in Italian and European urban historiography. 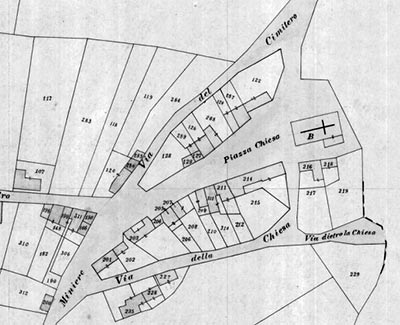 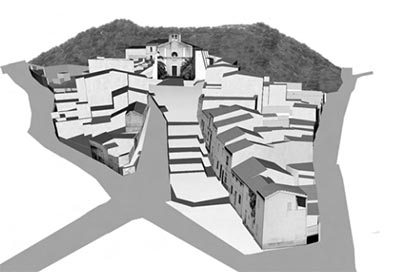