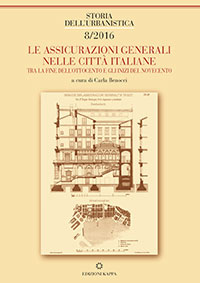 The topic addressed in this new issue of the magazine is placed appropriately, for methodological approach originality and level of depth monographic study, in the wake of the scientific project and editorial track from Storia dell Urbanistica from the start of its third series, inaugurated in 2009 with the aim of continuing to ensure to scholars -according to the intentions pursued by its founder in nearly half a century – a discussion area meets the requirement to document, so free and at the same time rigorous, the most results updated scientific research. An editorial space that, with the new series, it was intended to keep open and democratic form, away from the constraints and vetoes exercised by those baronial factions that never entirely ousted Italian university, have resurfaced with renewed encroachment on academic scene, facilitated by the progressive deterioration of content that now characterizes a non-negligible part of the sector studies, heavily conditioned by guidelines and methods inspired to conveniences and conformity.

The first part is entirely occupied by a long and demanding essay by the curator, thanks to which it is possible to arrive at an overview of the argument together, based on the examination of some of the urban and architectural initiatives undertaken by the insurance group, over a period of more than fifty years, in some of the major Italian cities (Venice, Florence, Milan, Turin, Genoa, Bologna, Naples, Palermo and Rome).

The second brings together eight essays, assigned to as many scholars academics, in which some of the achievements of Assicurazioni Generali in the above cities are detailed and implemented in connection with planning and architectural trends of the period. From these contributions it reveals the existence of two main programmatic strategies and actions of the Trieste business group. On the one hand, the company promotes the settlement of its operating locations and representation in the heart of the most important historic city spaces, under the banner of choices on their location and the architectural language, which, inspired by the need to instill image modern, harmoniously situated in the ancient fabric (prudently entrusted to some of the leading architects of the time), you go with it, so perhaps less flashy but equally incisive, to a strategy of expansion, purchase and supply of historic buildings in income the heart of the Renaissance city, as it happens, for example, in the case of Florence (1871-1910).

These investments, made in order to enable the conclusion of affordable real estate purchases in the vicinity of roads subject to significant changes coming, as in the case of enlargement Vacchereccia streets and Por Santa Maria, both located near the palace of the General Piazza della Signoria (1910), require timely and insightful knowledge of urban planning choices of the different municipalities and, with it, the reporting on the medium financial impact and long-term capacity, in which a role is not indifferent exercised by the investments made by the same company; which, thanks also to the quality of its products and to its far-sightedness in the choice of architectural and settlement types, proves to be capable of penetrating in order to influence the dynamics of building and land value.

On the other hand the rises company, in case for example of Rome, to a role of undisputed protagonist, both with the realization of its seat, as such intervention (which leads to the construction, around 1910, the monumental building in piazza Venezia) gives a sign of stylistic characterization totally unprecedented in the city landscape, it is, even more conditioning and full of future developments, by location – in remote areas or semi devices, intended for a sudden increase in value real estate complex to be put income, seizing the attractive opportunities thus offered by the lively panorama of urban renewal in the late nineteenth century and early twentieth century.

If the new headquarters in piazza Venezia is an effective symbol of economic and institutional strength of the insurance company, more complex are ratings that require urban programs and acquisitions of various buildings, especially along the via del Corso and piazza Colonna.

The close links with the Bank of Italy, which took over the properties and the Tiberina Bank programs and other banking institutions in bankruptcy, expand the activities of Generali in substantial planning and building initiatives, through the company, first of all the Company General Realty.

A chapter of extraordinary interest, on which it will take further research and insights, it should be pointed out in the action of completion of important areas, such as Ludovisi, exerted by the General and, likewise, the role played in the construction of neighborhoods Nomentano, Salario, Esquiline and the Camilluccia.

It is on this ground that the entrepreneurial and financial capabilities of the company’s president, Marco Besso (1843-1920), occur at a level comparable to what he will fill in as a tireless promoter of the completion of urbanistic and building programs initiated by other companies, as in the case of General Realty of public utility works and agriculture, which went bankrupt in 1896 and taken over by Generali.

As observed Benocci Besso operates a rod of iron, to the benefit not only of the Company but also creditors, forcing insolvent institutions or heavily involved in the most important building events to keep their commitments and act on the works of urbanization and edification established, which is excellent as the Ludovisi district. The years of his presidency are among themost prosperous of Immobiliare. 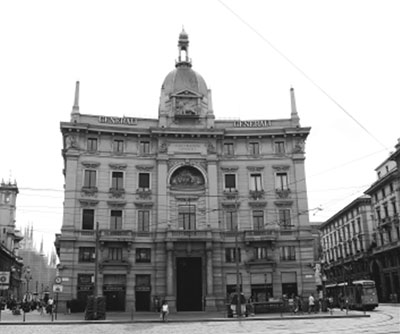